The flagship smartphone Huawei Mate 30, alas, has not yet reached Bel. And it is unlikely to get in view of the fact that the announcement of the P40 line will take place relatively soon. But the company cannot leave our market in winter with anything, so it brought a new product easier – Huawei Y9s. Or is it not such a novelty? We will understand in a blitz review.

The phone is quite massive (after all, it weighs more than 200 grams!), But outwardly gives the impression of airiness. Most likely, the matter is in a delicate coloring with fifty shimmering shades of blue and purple. True, when you take the device in your hand, the illusion dissipates – it is heavy. But pretty.

Of the interesting ones – a fingerprint sensor built into the power button. Subjectively, the most convenient location for the sensor. With recognition, too, everything is fine. The finger instantly finds the recess, and the sensor removes the lock in a matter of a few milliseconds. Instantly and without erroneous recognition. It’s certainly more convenient than the current sub-screen scanners.
The audio jack is in place, there is a pair of microphones, a mono speaker and a hybrid slot, which will fit a pair of SIM cards or a SIM card and a memory card. The connector for the cable is current, USB-C.

The model looks more expensive than it really is. The secret is in dimensions (we are used to the fact that large smartphones are more expensive) and in materials – the cover seems to be plastic, although it seems glass.

The dimensions and heavy weight of the Huawei Y9s can partially be justified by the presence of a huge, almost 6.6-inch display. An important and pleasant nuance for many is the screen without cutouts, “droplets”, “eyebrows” and other “defects”. Large full display on almost the entire front panel.

he front camera, as has happened with other similar smartphones more than once, was hidden inside the case. She drives out with a quiet buzz when you want to take a selfie. We praise the developers for not hanging the phone on her face, because this is an absolutely ineffective and even annoying option.

Display specifications are standard for the middle price category. IPS matrix, resolution 1080 × 2340 pixels, the margin of brightness (at least not on a sunny winter day) is full, auto-tuning works correctly. Such a standard screen for our time.

There are actually three main cameras, but essentially two. One 48-megapixel, another 8-megapixel wide-angle, plus a 2-megapixel sensor that helps blur the background in portrait shooting.

There is no optical stabilization, but during the day and without it everything is fine. The night mode allows you to take normal pictures in low light conditions, however, it may take several (many) attempts.

At night, it is better to forget about the wide-angle camera, but in the afternoon it can be suitable for experiments.

The heart of the Huawei Y9s is the old familiar Kirin 710 processor, which debuted in 2018 in mid-range Honor and Huawei smartphones. To help him assigned as much as 6 GB of RAM, which still need to try to use. The capacity of the built-in drive is 128 GB, but if desired, it can be expanded with a memory card.

Despite not the freshest and not the most powerful chip, its performance in everyday work is enough. Most likely, shell optimization plays a role in this, which is traditionally very smart for Huawei smartphones. In “heavy” games, one can observe either a decrease in the quality of graphics, or subsidence of fps. But there is no noticeable heating.

The 4000 mAh battery lasted for two days in our case. But neither wireless nor fast charging. As, by the way, there is no NFC chip either. 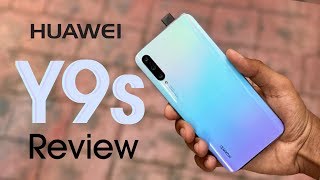 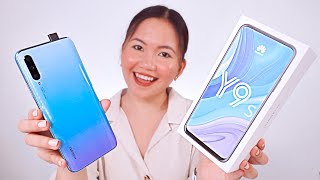 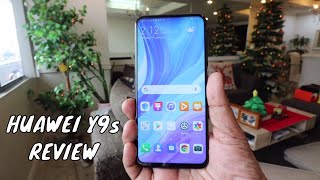 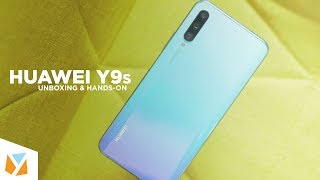 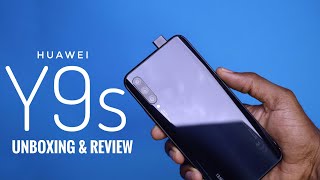 Honor 9X . At first, when the Huawei Y9s was spinning in my hands, I could not understand what it reminds me of. But really, this is practically a copy of the Honor 9X! The devices are identical up to the technical characteristics and dimensions. But there must be differences due to which 150 rubles were added to the price of Honor 9X?

We don’t take the design into account: someone will like the more aggressive design of the Honor 9X, and someone will like the calm blue of the Huawei Y9s. Perhaps the most noticeable difference is 6 GB of RAM in the Y9s instead of 4 GB in the 9X. An important advantage, but few users will be able to notice it. Another nuance is hiding in the location of the fingerprint sensor. If Honor has it located on the cover, then Huawei, recall, on the side button.

But why Huawei Y9s refused 5-GHz Wi-Fi, which is in Honor 9X, we still do not understand. This is a much more important parameter than placing a finger scanner.

Huawei Nova 4. A strong competitor was found even in the portfolio of Huawei. So, you can search for the Nova 4. It has a slightly smaller display, an identical set of cameras and the same price, but it has a powerful Kirin 970 chip, full Wi-Fi and no unnecessary driving front camera.

Samsung A70. Here the screen is even larger, and even now fashionable AMOLED. Plus a more capacious battery, Wi-Fi with support for 5 GHz and a more modern standard Bluetooth. True, a not very accurate and fast fingerprint sensor built into the screen. All this at plus or minus the same price.

Huawei Y9s is a good smartphone if you consider it as a thing in itself. But if you look back, it turns out that the model has a lot of competitors. Some of them are objectively better, while others with similar characteristics are cheaper. With the current pricing policy, the new product will not be easy to reach the purses of potential buyers.

Why are you so full of holes? Overview of the Honor View 20 smartphone with a 48 megapixel camera

We will be happy to hear your thoughts

egadget Blog ! egadget.pk is a great tool for online comparison shopping in Pakistan. We make it surprisingly easy for you to find a product, know about that product and compare it with others. Our goal is to provide the best comparison shopping experience on the Internet, and establish egadget.pk as the most trusted and effective online destination to make a purchase decision.

The above information was obtained from open sources, including from official sites and catalogs. Since we cannot guarantee 100% accuracy and completeness of product descriptions, ALWAYS check with the seller the parameters that are important to you and inspect the product upon receipt. After payment, it will be problematic to return or exchange an unsuitable product