You are here Home » Reviews » The heir to the legend. Advantages and disadvantages of the smartphone Honor 9X
Reviews

The heir to the legend. Advantages and disadvantages of the smartphone Honor 9X

Last year’s Honor 8X smartphone is still one of the most popular models in . And the secret seems to be simple – bright appearance, good iron and low price. But for some reason, organically combining all this in one product is obtained infrequently. A year later, the heir to the legendary phone – Honor 9X . In this quick review, we’ll see if he has a chance to repeat the success of his predecessor.

Everyone is already accustomed to the bright iridescent colors, but so far they are still catchy. In Honor 9X, they came up with the stylized pixel graphics letter X, which nicely plays on the back panel under any light source. Yes, it’s not a big deal what innovation, but for a practically budget segment this is good. True, with a complete transparent cover, this beauty will fade.

An unprecedented bonus compared to its predecessor is USB Type-C. The manufacturer finally came to understand that it is time to abandon the outdated port in low-cost smartphones. At the time, the presence of microUSB was one of the main complaints against the Honor 8X.

However, the novelty has become slightly larger and noticeably heavier than its predecessor. Perhaps someone 200 grams will be “nice to heavy hand”, but, in our opinion, this is already a bit much. The Honor 9X is bigger than the Honor 8X , it feels like a shovel. How to relate to this is a matter of personal preference.

Another notable improvement is the camera unit. The 20-megapixel module pumped up to 48 megapixels, plus they added a wide-angle module of 8 megapixels. There was also a sensor that helps blur the background in portrait shooting.

There is no optical stabilization, which is natural for this price segment. However, with a digital stub, daytime shots are decent. For night, there is a special mode that draws quality well. But focus only works with the main camera, using a wide-angle lens in the dark is useless.

A solid screen is good. The Honor 9X has an IPS matrix, subjectively very similar to what you could see in the Honor 8X. The diagonal has grown quite a bit, less than 0.1 inches. The resolution is the same – 1080 × 2340 pixels. This is enough to not suffer from a pixelated picture.

They refused the cutout. That is why in general we attributed the usual display to the advantages of the model. Nevertheless, it’s nice to see the whole screen. Alas, but, as in all other similar cases, I had to sacrifice the front camera. She will lead the rating of the shortcomings of the novelty.

It’s better to leave a hole or a drop in the screen than to fence gardens with a retractable selfie camera. We found this out on the example of Xiaomi Mi 9T . Using such a camera is inconvenient, it is slow and generally annoying. As practice shows, most owners of such devices simply do not use face unlock, and they try not to take selfies again.

Well, at least there is an alternative in the form of a normal (rather than a slow sub-screen) fingerprint sensor. True, and with him, everything is not very good. The sensor is located quite high, so owners of short fingers will not be easy.

We are already used to the fact that every new model in the lineup receives updated iron. However, due to US sanctions or something else, the Honor 9X was a sad exception to the rule. Like last year’s Honor 8X, it uses a Kirin 710 processor and 4 GB of RAM. Well, at least the amount of internal memory doubled to 128 GB.

For some reason, the letter F was added to the processor name, but in reality it is still the same chip on which the predecessor works. Even the results in the benchmarks match! No, in general, the smartphone’s performance is still enough for everyday tasks, but it’s still strange to see an “old” chip in the new product.

And for some reason, NFC and the LED indicator were removed. Very controversial downgrade on the background of Honor 8X. After all, the talk is just about those penny little things that make working with any phone a little nicer.

And for the money, Honor 9X has a breakthrough of competitors. Firstly, the same Honor 8X . Well, the model still looks great, the filling is still the same, and in some respects last year’s phone even surpasses the new product (the presence of NFC and an LED indicator). One-piece screen and updated camera? Given the price of this, you can safely close your eyes. In addition, if you choose Honor 8X with a drive half as much, then generally save 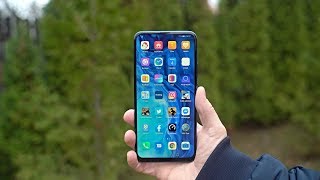 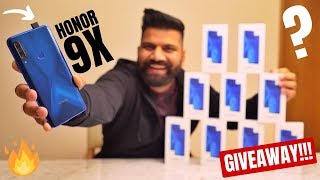 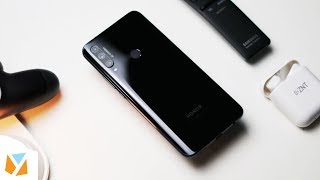 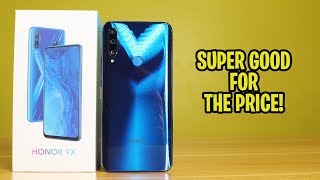 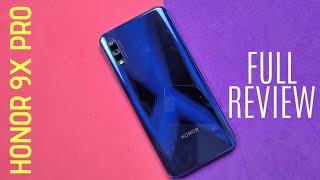 Xiaomi Redmi Note 8 Pro  is another formidable opponent. A model with 128 GB of memory costs a little more, but the camera here is at least no worse, more RAM (6 GB vs 4 GB), faster charging, a more capacious battery and a new version of Bluetooth. In addition, the Redmi Note 8 Pro does not have a stupid outgoing camera (although the display is not solid, but with a drop).

Samsung Galaxy A50 with a configuration of 4/128 GB also fits in ???. The display is slightly smaller, but there is no retractable camera, and even the device itself is more compact and lighter. In addition, fans of bright colors will delight the AMOLED matrix. The advantages of a Samsung smartphone include fast charging, NFC and Bluetooth 5.0. According to benchmarks, the performance of the Exynos 9610 processor is slightly lower, but the chip itself is more energy efficient.

He’s the first in the world.; Vivo X50 Pro Review smartphone with a gimbal for the camera

It looks more expensive, and even with NFC-payment. Smartphone Overview Honor 9A

The most honest iPhone. Review of the new iPhone SE

0 It is Wednesday, my dudes: a picture of a frog as the main meme of every Wednesday of the last five years

0 How do you do, fellow kids: the story of the main meme about the ridiculous attempts to pass for “your” on the Internet

0 “Endless homework”: how an anime girl became a symbol of YouTube streams with music for study and part of online culture